Home / Railroad Stories: The Way It Was / Railfan Stories / Incident at Tucson 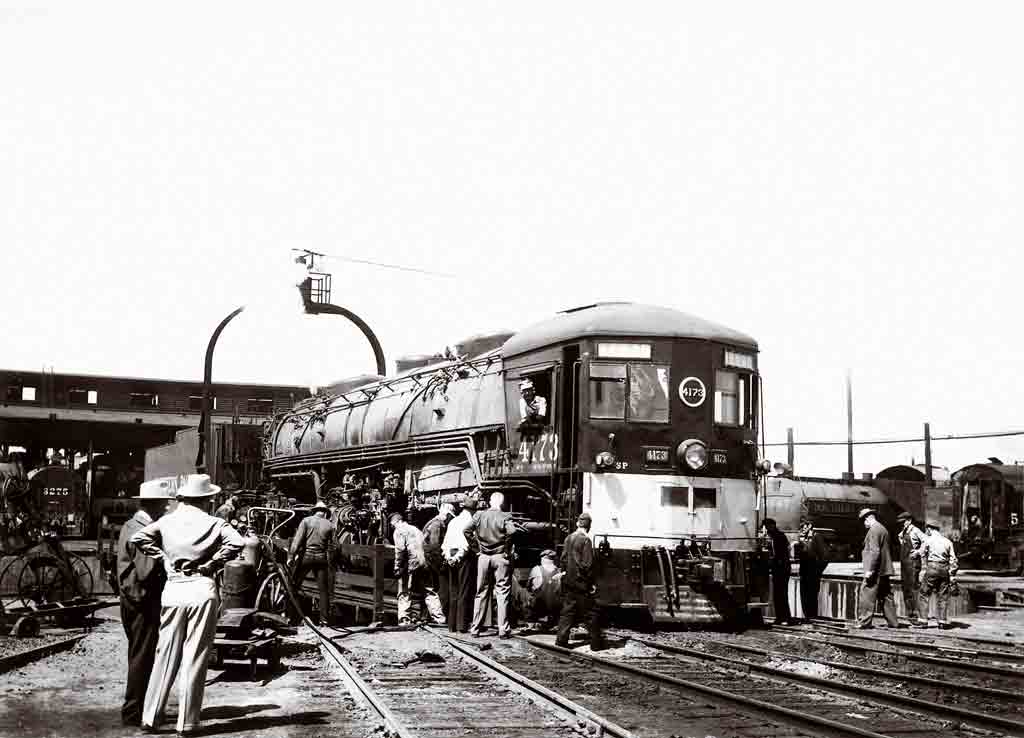 When SP cab-forward 4173 derailed on the turntable at Tucson, “suits” and laborers reported to the scene.
R. S. Plummer, Gordon Bassett coll.
I have been collecting old black-and-white railroad negatives for nearly 30 years. When I receive a new batch, it’s like Christmas, opening the package and sorting through the stuff. You never know what surprises will turn up.

The accompanying photo of Southern Pacific cab-forward 4-8-8-2 4173 is one of my favorite surprises. It was taken by the late Roger S. Plummer of Sulphur Springs, Texas.

Plummer traveled a lot in the 1950’s and had access to terminals and roundhouses. The negative envelope said simply, “Tucson, 1950. Engine runs off turntable.”

“Ho-hum,” I thought, “a cramped view with the drivers hidden by the turntable girders.” But as the print shows, the 4173 was not just rolling off the table, it had derailed. As most railfans over the age of 50 know, this was not a desirable event. Such a derailment could tie up a busy engine terminal for hours, with disastrous effect upon the railroad. The immediate effect was to bring more attention from the high brass than the roundhouse foreman wanted or needed.

My enjoyment of this photo was enhanced by two factors. First, I was an Army officer for 20 years. Experience taught me that if you had a major obstacle delaying the mission which required a lot of hard grunt work to clear up, you soon had an unwelcome audience of brass full of advice, but not about to get their hands dirty.

Second, I had a brief but wonderful time on a short-line railroad. Paul, our superintendent and general factotum, always said, “Watch out for The Suits.” Anyone dressed in office attire usually meant trouble.

So, here we have a crisis. A lot of hard work will be required to clear it up. There are at least 16 men at hand. At least three of them are “Suits,” which could include a terminal superintendent or his assistant, perhaps a special agent, or someone from the dispatcher’s office. The fellow in the leather jacket could be a trainmaster. Next to him is a man in a white shirt—another “brass hat”? Either the man in overalls and faded cap on his left, or the one squatting down to the right of Leather Jacket is probably the foreman who is actually in charge of the operation. No telling who the fellow in Levi’s next to the welding cart might be, but he seems to have words of wisdom for someone in the pit. We have a half dozen other laborers observing or ready to pitch in, and probably a few more down in the pit.

And above them all, patiently waiting in the cab window, is the hostler. His cap visor shades his face, so we can’t see his expression, but his general appearance seems to say, “Who me? Would I derail a Malley on the turntable? Never!”

So, here we have a snapshot of the railroad in crisis. A lot of hard work to be done, and a large part of the chain of command on hand to “help.” It is instructive that about half of these gentlemen have their hands in their pockets or on their hips. It would be interesting to know how long the 4173 tied up the roundhouse.

To me, this photo is a classic. I have hundreds of shots of steam locomotives that are just good engine portraits. But occasionally one comes along with a story to tell.

One thought on “Incident at Tucson”