Home / Railroad Stories: The Way It Was / Railfan Stories / Finis for Philo

Memories of a rural Wabash station, and the day it had a big, unwelcome visitor 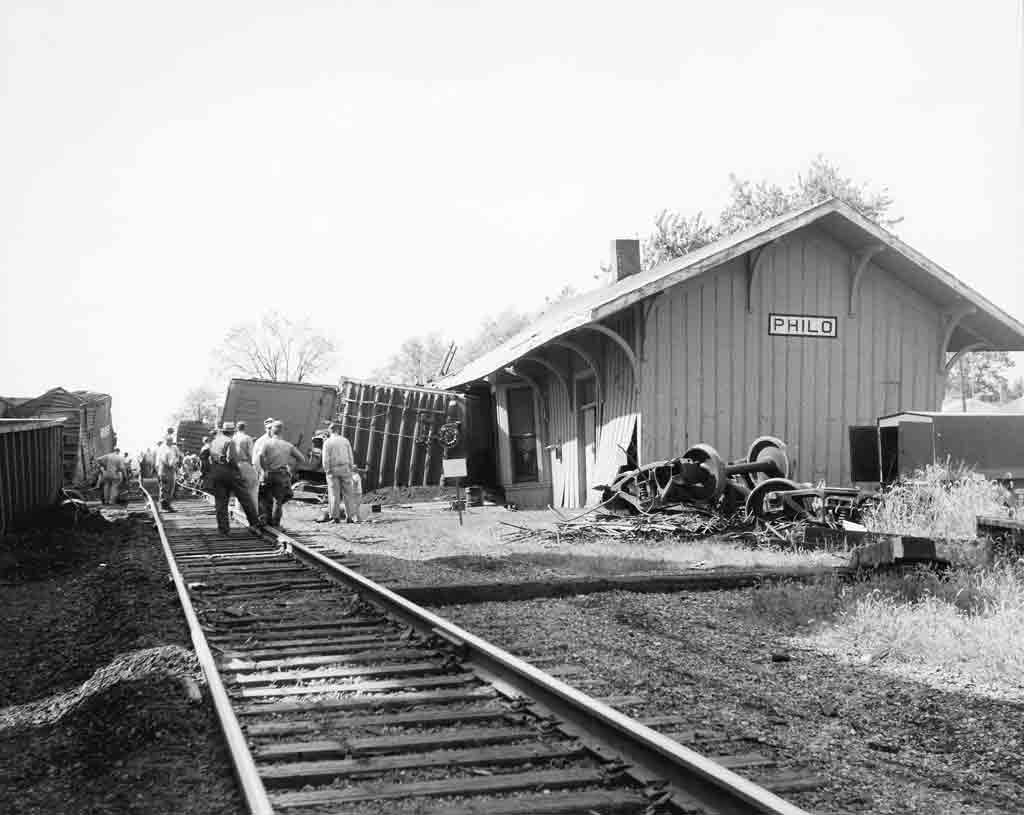 A 1962 freight derailment spelled the end for the century-old Wabash depot at little Philo, Ill.
Glen Brewer
My clock-radio came on at the usual morning hour with the local news. The date was Wednesday, October 3, 1962. The announcer reported a train wreck in Philo, Ill., the previous evening, blocking the Wabash Railroad’s main line east from Decatur, Ill., to Detroit. I put on a white shirt, tie, sport coat, and fedora, grabbed my father’s camera, which I had with me at school, and headed out the door.

I knew Philo well. My mother and father had grown up in this tiny agricultural community in east-central Illinois. It was not far south of Urbana, where I was attending the University of Illinois.

The Toledo, Wabash & Western came through in 1856, but the town, named for local pioneer Philo Hale, wasn’t founded until 1864. The station building must have dated to about that time.

It was a typical Wabash board-and-batten, single-story depot, painted gray. It contained a central office with a bay window for the operator, a gloomy waiting room, and a freight and express room. Outside, north of the station, were the usual “conveniences.” Passenger trains seldom, if ever, stopped in Philo by the time of my memory, but the mail still moved in and out by train.

The job of the agent-operator must have been pretty lonely; the town had only the grain elevator and the lumberyard to keep him occupied with business. I believe that even by this time, the agents actually served several small stations a few hours of each day.

I remember once listening to the operator chatting over the telegraph. Those guys were fast. Even though I had tried to learn a little Morse, the blur of the clattering sounder was impossible for me to decipher.

My father was born in 1903 in a little house not far from the tracks. He remembered lying in bed as a boy, listening to the engines trying to make it up the hill with heavy westbound freights. It was not uncommon, he recalled, that they would stall and have to double the hill. My mother’s father still lived in the house several blocks south of the station he had owned since the 1920s.

On one trip shortly after I had my driver’s license, we were visiting Grandfather when I heard the Cannon Ball, the daytime Detroit-St. Louis train, coming. I drove down to the depot, my father’s Yashica double-lens-reflex camera loaded and ready. My goal was to capture the action as the mail clerk on board snagged the mailbag using the RPO car’s hook. But as I peered down into the dim viewfinder, I couldn’t even spot the mail car. I tried the shot anyway, but missed by three carlengths.

Another day when we arrived in Philo we saw shredded paper littering the right of way from one end of town to the other. We learned that a bundle of Sunday newspapers had been shoved off the mail car at speed, as usual, but had bounced back under the wheels.

I reflected on these memories as I drove down from Urbana to Philo following the news broadcast of the wreck. The scene was much worse than I had expected. Freight cars were piled up all over the center of town. A boxcar had smashed into the station and knocked the building askew. Fortunately, nobody was hurt. Crews were busy pushing freight cars out of the way and torching off parts that would not clear a train on the rebuilt main line. By noon, a path was completed and rails relayed. Westbound trains began to pass by slowly.

My little ruse with the hat and coat worked; no one questioned my being there, although the ICC examiner did stop me to compare notes. We observed that a car on the ill-fated train had left the rails more than half a mile west of the depot, rode the ties successfully over the highway crossing, and then, when it got to the lumberyard switch, derailed and caused the train to pile up.

In the Champaign News-Gazette story that day, I learned the specifics: a 112-car train was doing about 60 mph at 9:10 p.m. when a wheel broke on the 41st car. When that car hit the switch, it and 21 more cars derailed.

A few weeks later, I drove down to Philo to visit my 90-year-old grandfather. He wasn’t home. I soon found him across the street, cutting a well-seasoned, oversize board with a hand saw. He was helping his neighbor make a garage out of lumber recovered from the Wabash depot.